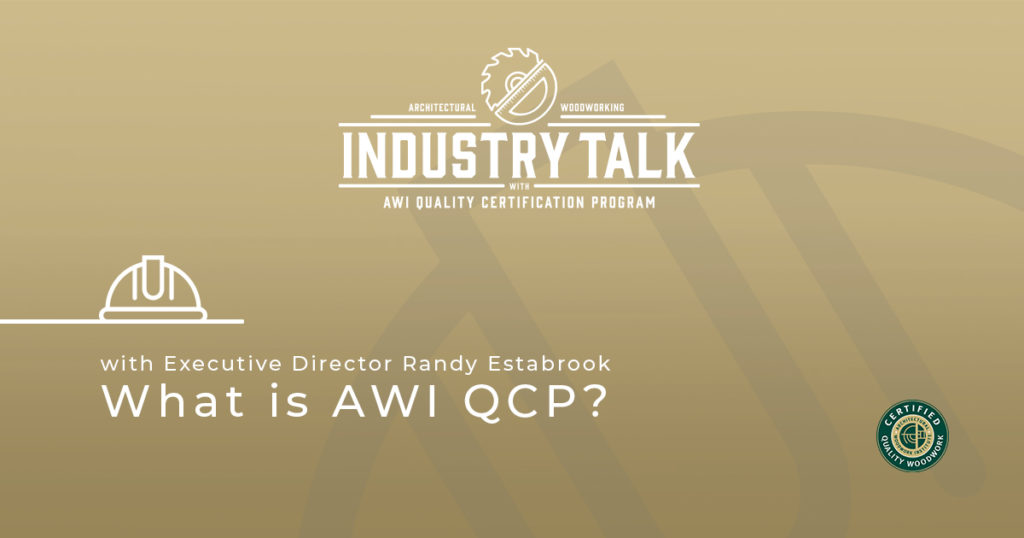 What is AWI-QCP and How Does It Work?

Woodworkers and architects new to AWI-QCP often ask us about our origins and how we work – so here’s your complete guide!

We can actually expand this into two separate questions: what is the Architectural Woodwork Institute (AWI) and what is the Quality Certification Program (QCP)? Breaking it down makes it easier to understand the connection between the two in terms of establishing standards in the woodwork industry.

The basic difference is that AWI helped to create the Architectural Woodworking Standards, while QCP provides certification based on these standards.

The Architectural Woodwork Institute or AWI is a professional trade association that was founded in 1954 in Chicago, IL. It was preceded by the Millwork Cost Bureau, founded in 1914.  AWI was part of the organization’s program, providing estimates for millwork companies. It later evolved into an organization of various companies and professionals in the industry.

During the fourth annual meeting of AWI, the famous American architect, Frank Lloyd Wright, attended as a guest of honor and an awardee. He was among those who used a lot of wood in his projects. These annual meetings brought up the idea of creating quality standards for the industry, and the organization started in the United States but now has members in 34 countries.

AWI helped establish quality standards for the industry in 1961. These standards included specifications for the various aspects of woodworking such as the type of wood, type of cuts, etc.

A Common set of Woodworking Standards

The first copy of the AWI quality standards manual was printed in 1961. It was five inches wide, seven inches long, and half an inch thick…and that was relatively concise. Today’s manual is over 600 pages long and about 8½ x 11 inches in size. It has grown over the years as members have made suggestions and improvements to the quality standards.

A board of review considers these suggestions and decides whether or not to add the suggestions and revise the manual to make it more updated. This became the basis for the creation of AWI’s Quality Certification Program (QCP) – a response to the requests of many design professionals for enforcing their design specifications.

In the 1990s, AWI started considering the development of a certification program – but some members were against it and there were several hot debates during the board meetings. However, despite the initial disagreements, the board eventually came up with the Quality Certification Program in 1995.

The first three projects that became QCP-certified were in the state of Minnesota, and the program grew from there. A couple of hundred of companies participated during the first five years, but the challenge was that it was not very cost-effective. AWI experienced financial losses of about US$500,000.

Eventually, QCP grew and became stable. We have provided architects and other professionals in the industry an independent third-party quality assurance checker, and today there are almost 600 QCP-licensed woodworking firms.

We inspect about 300 projects and label about 1,200 projects every year. Although not every project is inspected, every project that is registered and labeled is eligible for inspection when required by the client.

Our main challenge today is making the companies and professionals aware of who QCP is and what we do. We need to answer these three common questions:

Becoming QCP licensed is not easy as sending payment and immediately getting a certification. There are several requirements to be part of the program and get accredited.

To have a preliminary license, you must:

Once you complied with the requirements, you can be licensed. This means that you have passed all the required quality standards. You’ll then need to undergo an inspection every three years.

You can leverage your certification in your marketing efforts and use it to distinguish yourself from competition.