What Type of Wood Is Best For Your Architectural Woodwork Project?

There are usually many factors and conditions which contribute to the selection of the appropriate type of wood for an interior architectural design project. This might include the intended use of the space, cost, hardwood or softwood, relative stability, local and environmental factors, and legislation.

The Architectural Woodwork Standards provides comprehensive guidance and information on the characteristics of wood, and in this article we’ll look specifically at the types of wood to consider for your architectural woodwork project.

About Lumber in Architectural Woodwork

Lumber used in architectural woodwork is either:

The hardwood/softwood classification can seem like a misnomer as the names don’t refer to how hard or soft the wood is. For example, balsa is a hardwood that is softer than many softwoods, and yew is a softwood that is harder than many hardwoods. Hardness also varies greatly between species within each group. Both hardwood and softwood are graded. Hardwood is graded on the percentage of usable material, and softwood is graded on strength and appearance.

Biological and Aesthetic Characteristics of Different Types of Wood

With so many types of wood to choose from, it’s important to understand the main differences, both aesthetic and biological, between them. This knowledge will help you choose the right type of wood for your interior woodwork project.

Related: A Guide to Wood Veneers

What to Consider When Choosing Wood for Your Interior Woodwork Project

There are a few things to consider when it comes to choosing the right type of wood for your architectural woodwork project, including:

In order to simplify things, the AWI section on lumber contains a Comparative Table of Wood Species, showing relevant characteristics of the main species of domestic and foreign woods used by the architectural woodwork industry.

This table will help you make an informed selection of the type of wood you need. 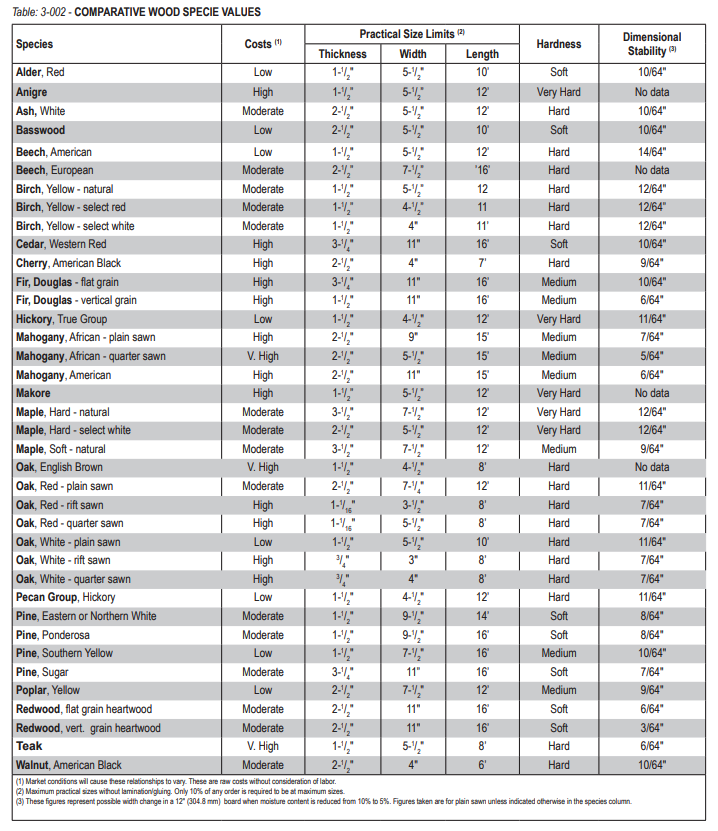 As shown, a design professional has a wide variety of foreign and domestic species of wood to choose from. The unique quality that wood imparts is that each type of wood has its own distinguishing characteristics. Once the species is chosen, its effectiveness can vary according to the manner in which it is sawn, sliced as veneer, treated, and finished. The Architectural Woodwork Standards aims to advise you on the comparisons, considerations, and species which should be evaluated before decisions are made and specifications are written. An informed choice will reward your client with the best possible performance by a natural building material.

You’ll find all the information and guidance you need about lumber in the Architectural Woodwork Standards. This section covers lumber in detail, as well as compliance requirements.

Contact us to find out more about how you can join the American Woodwork Institute’s Quality Certification Program and build your reputation for high-quality woodwork.