Tech Talk: The Times They Are A-Changin’

Since the 1960s, the Architectural Woodwork Institute (AWI) has created proprietary woodwork standards for use by its members and the industry in general, most recently along with the Woodwork Institute (WI), and the Architectural Woodwork Manufacturers’ Association of Canada (AWMAC). And since its inception in 1996, the Quality Certification Program (QCP) has used those same standards as its primary basis for quality assurance and related project certification.  As materials, methods, and technology evolved in the woodworking universe, those standards were inevitably revised and re-formatted, sometimes extensively, to reflect the industry’s new realities.  Most of our readers are likely aware that such a change has recently taken place with the official partial release of new AWI sections.  The following notice (courtesy of AWI) summarizes the timing and specification language under which the new standard applies (or does not apply) to your architectural woodwork projects: 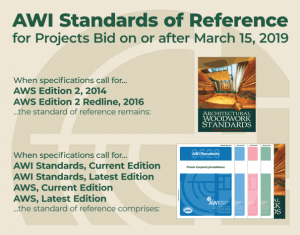 In the past, to help educate both staff and licensed woodworkers concerning differences between a new standard and its predecessor, QCP has used various venues to compare and contrast related “line item” details from both.  Quality Times and Tech Talk will continue that practice.  The first topic we will explore in that regard is Cabinet Structural Integrity Testing.  This is an option which can be exercised by casework manufacturers to establish conformance of a cabinet which in some way does not follow the standard’s prescriptive rules for casework construction.  Technically, this option is not new to the latest standard, since structural testing first appeared in the Architectural Woodwork Standards, Edition 1 (2009).  However, with the advent of the AWI sections, structural testing has only recently become a major point of emphasis.  Especially as the new sections become the standard typically specified by architects, structural testing promises to represent a significant shift in the way conformance of cabinets is assessed by the Quality Certification Program.

The impetus for the growing focus on structural testing might be summarized as follows:  Over the years, the standards have tended to become more complex and prescriptive as they evolved.  While this trend could be shown to arguably improve any particular line-item in the standard, it also led at times to frustration on the part of woodworkers.  For a company trying to achieve QCP certification for one of its projects, the sore point was often not the size or complexity of the standards per se.  Rather, it was manufacturers having to modify or replace their sometimes long-established, and quite successful cabinet fabrication methods with the standard’s construction details, in order to meet the “letter” of the standards’ prescriptive requirements.  To some woodworkers, this seemed unnecessary and unreasonable, since there was no evidence that the “conforming” cabinet based on the minimum criteria of the standard would perform any better than their company’s proprietary cabinet.  Prior to the addition of structural integrity testing to AWS Edition 1, a woodworker’s only alternative to following the standard precisely would be to obtain the project architect’s approval of their company’s proprietary cabinet (often not an attractive or practical alternative).

AWI adapted the testing procedure itself from the Scientific Equipment and Fixture Association (SEFA) methods and requirements.  The testing’s basic concept is that within certain material and joinery parameters, a cabinet that passes SEFA testing would be considered conforming at certain performance levels.   Any future cabinets proven by the manufacturer to be sufficiently identical to the cabinet originally tested are also considered conforming without additional testing.

Although the testing option does appear in the AWS Edition 2 (2014), its presence in that standard is not prominent.  In the 50 plus pages of AWS Edition 2 Section 10 (Casework), there are only three sentences alluding to testing, one of which was added as a redline over a year after the publication’s initial release.  With the adoption of the new sections, AWI has taken an institutional decision to lift the structural integrity testing option out of relative obscurity and make it a significant feature of the new standard and AWI culture.  Symbolic of this commitment is AWI’s establishment of its own cabinet testing facility in Americus, Georgia.  For more information on that initiative, and Cabinet Structural Integrity Testing in general, visit awinet.org, and click “Testing”.

Your Opportunity to Sound Off

Currently, AWI is inviting your input to help shape the ongoing development of the new draft section’s Architectural Wood Casework requirements.  AWI’s home page at www.awinet.org currently features an article providing details on how and where to direct your comments.  It is important to note that the development of the new sections marks a major departure from AWI’s previous methods and procedures for writing a standard.  These sections were created under the auspices of the American National Standards Institute (ANSI), which Wikipedia describes as “a private non-profit organization that oversees the development of voluntary consensus standards for products, services, processes, systems, and personnel in the United States.”  In other words, ANSI does not develop any actual standard, but it does offer a rigorous, time tested, voluntary framework for standards development.  A crucial component of this is the mandatory opportunity for input from a broad spectrum of stakeholders in the affected industry, and mandatory “best effort” resolution of any significant issues which have been raised by that input.  Here is your chance to make a difference in the final content of your future casework standards.