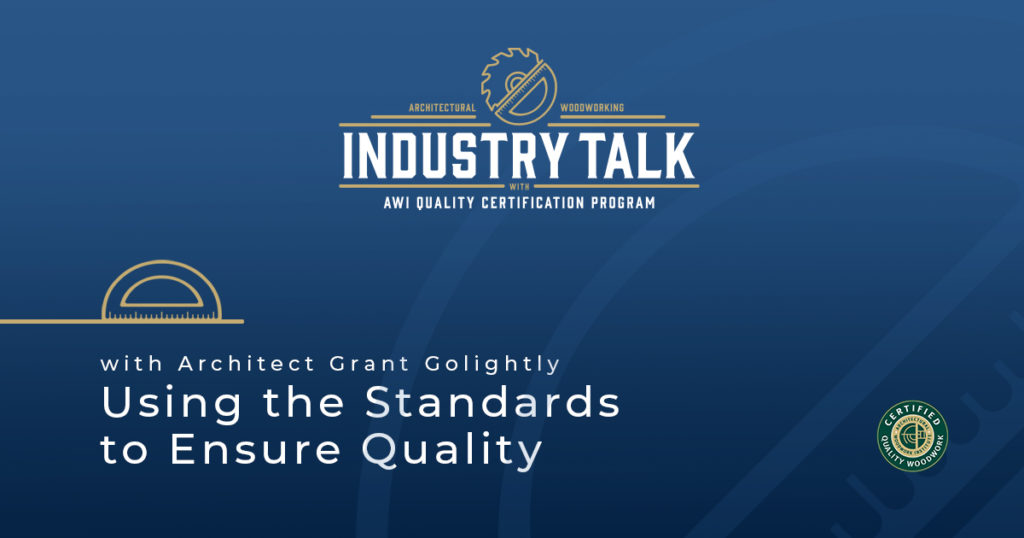 How An Architect Was Saved By The Standards

Grant Golightly, an architect from Salt Lake City, UT, managed a multi-million dollar project with the Salt Lake Mosquito Abatement District for a new campus where millwork was an important aspect of the interior design, and he needed assurance that the millwork met his specifications. We talked to him about how and why QCP helped make his project a success.

We have an ongoing problem with mosquitoes as many areas do, and we’ve had the privilege of working with a couple of mosquito abatement districts in the area. This particular project was for a mosquito research campus on about eight acres of property.

There was a significant amount of laboratory millwork, and it was also an important aspect of the interior design. The durability, longevity, and quality of the product were really important.

How did you come to work with QCP?

It was interesting because while I had a very involved role in this project, I wasn’t the project manager. The actual PM went down the route of specifying the project as QCP, but then he left his role and we had a little bit of a hole. We were trying to figure out what he did, why he did it, how it came about. Coincidentally, we had a ‘lunch and learn’ with QCP around that time when the representative talked about cabinetry, millwork, and millwork standards and why it would be important to have a program like this in place.

And we happened to have been inspecting the millwork submittals for this project and we started wondering what kind of standard did we have in place? Did we have something that we could hold the contractor to, to make sure we get the quality? Luckily when we pulled up the specifications, it was very clear that QPC was very clearly defined in the specifications, which was a great relief.

What was in the specs wasn’t just providing Grade A millwork or some other nomenclature that doesn’t have an enforceable standard behind it, but as we talked to QCP to figure out how to proceed, we found out the project had been registered but the proposed millwork provider was not QCP-licensed.

Our second challenge came in realizing we’d have to reject or revise the shop drawings and resubmit them under QCP. The problem was that there weren’t any QCP-licensed woodworkers readily available that had participated during the bid process.

That the manufacturer that had provided the shop drawings decided that they had enough time in their critical path to get QCP licensing, so they began that process and they expedited it pretty quickly. They came out and had their shop inspected and provided the sample millwork that was required to achieve their license. It was a real relief to find out that they were willing to do that.

It’s possible that they could have provided top quality, top of the line cabinetry, but without an enforceable standard in place, how am I to know? My expertise is not millwork, I don’t inspect millwork daily or even weekly or yearly for that matter. So I wouldn’t know what to look for or what types of things should be required when it comes to some of these standards.

Subsequently, they created the first batch of cabinetry. A QCP inspector came out and inspected it in the shop before it was delivered to the site and there were no non-conformities found in the report. That gave us a great sense of comfort, as an architect and an owner, to know that the product being provided met these standards and didn’t have any deficiencies. We considered that to be a great win.

Getting Value from QCP

When the second batch of cabinetry was delivered to the site before the QCP inspection occurred, it was noted on site that several of the cabinets had bulges or areas where screws had caused a little bit of deformity in the surface. By using QCP, we knew that this issue would be resolved at no cost or worry to us.

If we didn’t have QCP in place and in our specifications, what would we have done? How could we have enforced a standard that didn’t exist or wasn’t specified? But because we had specified QCP, we were able to defend the quality of the product that was being installed and provided, and basically educate the owner that we can either accept it, we can reject it and require a replacement, we can accept a credit for the deficiencies, or have an extended warranty. Those are things that we wouldn’t have had without this in the specification.

QCP was something that gave us a foothold into what we expected and what we wanted to be delivered for this project. As a contractor, I’m sure it’s frustrating to have to jump through inspection hoops, but the best projects are the ones that have accountability built into them, especially when everybody knows that upfront.

Inspecting woodwork is like inspecting anything else – testing concrete, framing inspections, etc. Some are very specific to lifesaving, some of them are specific to quality control, some are about aesthetics. I think to have a successful project you can’t ignore any one of those elements.

What Would Have Happened without QCP?

As I look back, it surprises me that there weren’t more issues. But still, nothing compares to being able to pull out the standards and say, “No, right here on page 17 it says it’s supposed to be this way, and you knew that. We knew that. Everybody knew that. What are we going to do to fix the problem?”

Has using QCP Changed your Processes?

Not really, but it has made us pay attention. It’s made us care a little bit more. What it’s given us is that opportunity to think about the importance of understanding what information we put in our drawings. The details that show the size and location of a cabinet alone isn’t enough. Understanding the quality and workmanship that goes behind it is critical too, and giving us a leg to stand on when we ask for things. If this cabinetry had been delivered with these deficiencies I described earlier, the bulging, the screws and different things, and we didn’t have this in place, how could we possibly expect to go back to the contractor or the millworks provider and say, “Well, this isn’t good enough. This doesn’t meet our standard.” Well, what standard? How do you define that standard? What does it mean? And, to understand that what we put in the drawings, what we put in the specifications, has enforceable power.

You don’t have to reinvent the wheel to put QCP specification in your plans. All it does is it puts a requirement that the millwork provider, manufacturer, the shop, and the installers are QCP-licensed. Then it really puts the burden on those individuals to make sure they meet those qualifications.

Why architects should consider QCP

QCP alleviates a lot of the pressure from you as the architect because you don’t need to specify in great detail – you simply need to put in your specs that you want the project to be completed to the Architectural Woodwork Standards because the details are built into the standards. It gives you something to fall back on and something to hold the contractor to a standard, and give the deliverable that was expected to begin with.

I would just encourage anybody to make sure they are seeking out associations like QCP that give them the leverage and opportunity to give their clients what they expect, and what they deserve. I think that having standards in place like this helps everybody to do their best, give their best to the project, and make it the positive outcome for everybody.

Are you an architect? Get the support you need for interior woodwork projects from QCP.