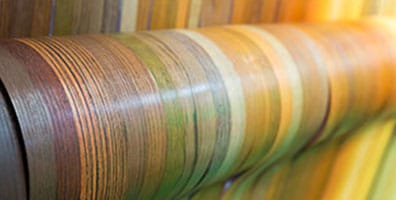 In the pantheon of AWI and QCP technical topics, one of the most perennial is the adverse (sometimes catastrophic) effect that significant changes in humidity can have on woodwork. This is, of course, most often relevant during the installation phase of a project, when the job site is not always completely closed to outside weather, and/or the climate control system within the building may not be fully up and running.  This can produce temperatures and humidity levels during installation which are outside the acceptable limits prescribed in Section 2 of the 2014 Architectural Woodwork Standards (AWS).  Then, once the building is finally closed to the outdoors, and the HVAC is functional, the change in temperature and humidity can be significant, causing pronounced contraction or expansion of woodwork components.  If severe enough, this movement may cause joint or material failure.  If the woodwork subcontractor does not raise a red flag to project stakeholders at the first indication of such climate control issues, any failure of the millwork could later be attributed to shoddy workmanship rather than the radical swing in the building’s relative humidity.  Where possible, a woodworker’s use of instrumentation from “day one” to provide hard data on humidity swings over time is of course always desirable.

One category of woodwork that is susceptible to job site “climate change” is wood or HPDL wall paneling.  The large quantity of adjacent sheet goods required to cover some of the more sizeable commercial interior walls represents the potential for hefty dimensional changes in a panel run, should the humidity change.  Accordingly, decorative panels commonly feature architectural details such as rabbeted back edges “floating” over stationary reveals to allow for unrestricted movement of large panel elevations during humidity fluctuations.

However, among the projects inspected by QCP, we occasionally see wall panel elevations for which an architect has specified “edge-to-edge” installation (perhaps even abutting structural walls), with no apparent means for the panels to move.  The AWS addresses such situations, making it the responsibility of the installer to provide “expansion joints” to accommodate movement of the panels (AWS page 228,  8.6.1.13 etc.).  The Standard includes mathematical formulas which allow the installer to determine the minimum total width of relief space which must be distributed over any combination of expansion joints.  This calculation is based on the overall length of the panel run (whether horizontal or vertical):

There are some aspects of this AWS requirement worth noting.  First, the “expansion joint” may be somewhat misnamed, since it allows movement caused by either swelling or shrinkage of the panels.  Secondly, creating expansion joints on finished material would usually be a difficult proposition under typical field conditions.  Among the challenges faced by installers executing an expansion joint would be the resulting raw substrate edges, which are required to be finished in some manner.  Additionally, many architects might consider the addition of these expansion joints to be an unacceptable change to the aesthetic intent of the panel run. Obviously, it would be preferable for the woodwork subcontractor to point out the expansion joint requirement to the architect in the shop drawings and request that he/she approve proposed locations and sizes of the expansion joints.  Settling this design question before manufacturing begins would allow for machining and finishing of expansion joints or other “movement” solutions at the woodworker’s facility during fabrication of the panel run.  This would provide maximum control over the process while effectively removing expansion joint responsibility from the installer.