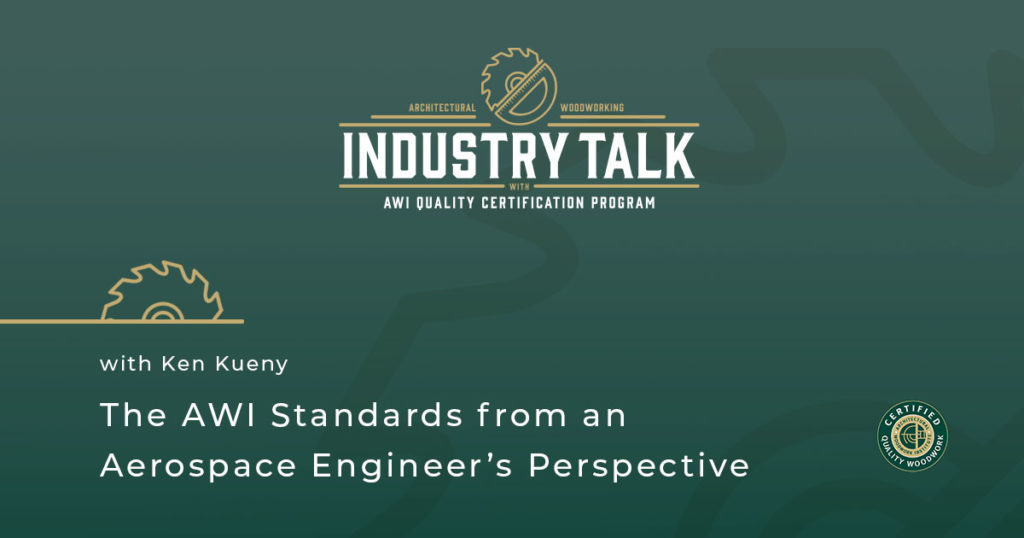 The AWI Standards from an Aerospace Engineer’s Perspective: an Interview With Ken Kueny

In our most recent podcast, our very own QCP Director of Inspections, Greg Parham, spoke with Ken Kueny, owner of Karn Custom Woodwork Inc., about his thoughts on the AWI Standards and the Quality Certification Program.

Continue reading to hear about how the Standards aided Ken’s transition from working in the aerospace industry to running a successful woodworking business, or listen to the podcast in full here.

From Aerospace Engineering to Architectural Woodworking

Ken’s path to the architectural woodwork industry isn’t what most would expect. While many of us have worked our way through the construction or woodworking field, “eating sawdust” as Greg puts it, Ken Kueny hails from the aerospace industry. With thirty years under his belt, Ken decided it was time to embark on a new business venture:

Ken says, “I kind of reached the point where I didn’t think I had much more in the way of legs to my career, and I really had a strong desire to have my own business and just be out of that fray. Another significant piece to [starting a woodworking firm] was my son had finished college and was struggling to get a toe hold, so I thought it’d be a good idea if we could perhaps pursue something where we could work together, and that’s what we’ve pulled off.”

How Does a Background in Aerospace Engineering Help in Running a Woodworking Firm?

Ken believes that despite the obvious differences between woodwork and aerospace, the two industries actually have a lot of crossovers and transferable skills between them.

By “CNC work”, Ken is referring to computer numerical control. In woodworking, these automated machining tools are used to fabricate objects from wood. Similarly, the woodworking industry uses CAD/CAM systems to prototype finished pieces and production runs. This integration between technology and traditional woodworking has been crucial in streamlining production and keeping the industry up-to-date with modern practices. According to Greg: “Woodworking’s always been a little bit behind on the technology, but nowadays, you pretty much can’t get around using CNC.”

For Ken, this technical integration felt more nostalgic: “I remember those transitions playing out in the aerospace industry and sure enough, thirty years later, I end up in the woodworking industry and it’s the same show. I actually feel that I have a pretty strong sense of intuition about the right path to take because of having seen it played out in a parallel industry.”

One topic we were eager to discuss with Ken was his perspective on the AWI Standards and how QCP compares to the practices carried out in his former industry. These regulated forms of quality assurance were unfamiliar concepts to Ken when he bought his woodworking firm, and, having been employed as an aerospace engineer for thirty years, was used to a different workflow:

He says, “Usually, in engineering, particularly aerospace, you’re trying to design to very extreme specifications – every ounce of weight in a spacecraft is critical. So, you’ll come up with a design that’s kind of on the very edge, and then have to prove that through testing, as opposed to having a standard rule that says “hey, a certain bracket needs to be so thick” – that would never fly.

“The AWI Standards are kind of the inverse of that – it’s more like “through years of building cabinets we’ve determined that if a shelf is so wide it needs to be so thick.” While that may not have been verified by testing, it’s been verified by application in the field over many, many years. To me, it’s easier to just comply with a standard like that than have to test every cabinet that I make.”

Indeed, the AWI Standards benefits industry workers with a solid quality assurance guideline that ensures every architectural piece is fabricated to the highest possible standard. As Ken says in the podcast, these Standards have been developed over many years according to the new and evolving best practices in the industry.

QCP Certification demonstrates that these Standards have been adhered to on a woodworking project. This brings a range of benefits to contractors, woodworkers and architects alike: QCP-licensed firms are more reliable and committed; QCP-registered projects ensure a higher quality and adhering to the Standards also means that the end result of every product will always be the same level of quality.

Another benefit of the AWI Standards and Quality Certification Program is that they reduce risk in terms of correcting non-conformities. This is something Ken found particularly reassuring: “It’s beneficial to have those rules, and then know, as a business owner coming in, that if we follow the rules then, on average, in general, our stuff shouldn’t fall apart, and then I don’t have that outstanding working risk hanging over my head.”

Put simply, if a woodworking project is able to be measured against a set of industry standards, it reduces the risk of faulty or potentially hazardous products. If non-conformities are identified, it’s the responsibility of the licensed woodworker to implement corrections, otherwise they may lose their license. If you’re a general contractor or architect, this is good news because it means you’re not as liable for delivering a non-compliant project.

Thoughts on the New Duty Level Designations on Casework

Similar to how aerospace engineers have to prove their design meets specifications through stringent testing, AWI’s recent changes to the Standards mean that woodworkers must now either fabricate products in line with testing methodologies, or have their product tested at an ANSI-accredited testing lab. This places a much greater emphasis on interior woodwork being structurally sound as opposed to, on paper, simply adhering to a checklist of requirements.

Now, instead of following a prescriptive guideline, woodworking firms may fabricate casework products using their own testing methodologies. This is in response to the new duty level designations in the AWI Standards that specifically relate to construction methodologies and performance duties of casework.

This new requirement echoes what Ken told us about aerospace engineering design, so we asked what his thoughts were about these updates. He says, “Well, I think there might be corner cases where the existing standards don’t fit so well. In my experience, coming up on five years of owning this company, I haven’t seen a case where I would have preferred testing.

“But if we were using newer, different materials, or it was something that was just outside the realm of what I’ve seen, [testing a product] would be beneficial. I do think that there should be that path, because there might be a good reason for it, and if you can test it and prove that it works then you should be able to do it.”

Learn more about the new AWI Standards in our conversation with Zach Deas, owner of Deas Millwork, where we explain the changes in more detail and shed light on how they might affect woodworkers and architects.

Why Should Woodworking Firms Comply With AWI Standards?

There are many benefits that come with complying with the Standards and gaining QCP project certification. We mentioned a few reasons earlier: clients are more likely to hire a woodworking firm that is QCP-licensed because it provides a benchmark of quality, reliability, and cost effectiveness.

But while we could talk about the glories of the AWI Standards and Quality Certification Program all day, we wanted to know what Ken, a self-described “outsider” to the industry, would say to those who were still on the fence about following the Standards.

Ken says, “For me, coming in from the outside, following the Standards was just an easier path. The previous owner had the pattern of applying the AWI Standards whether or not a job was signed off on as QCP by the customer. That way, we didn’t have to have essentially two different product lines, and people potentially being confused between the two. We just built the same cabinet every day, the same way, and it was just a question of the extra paperwork if somebody wanted it certified.”

Complying with the AWI Standards means that a woodworking firm won’t have to worry about the quality of their products because they will meet the same quality standard every time. Rather than having to change the way you do things for a single QCP project, following the Standards will streamline your workflow by making every product compliant. Then, in Ken’s words, it’s just a matter of filling out some paperwork to gain official QCP certification should a client require it.