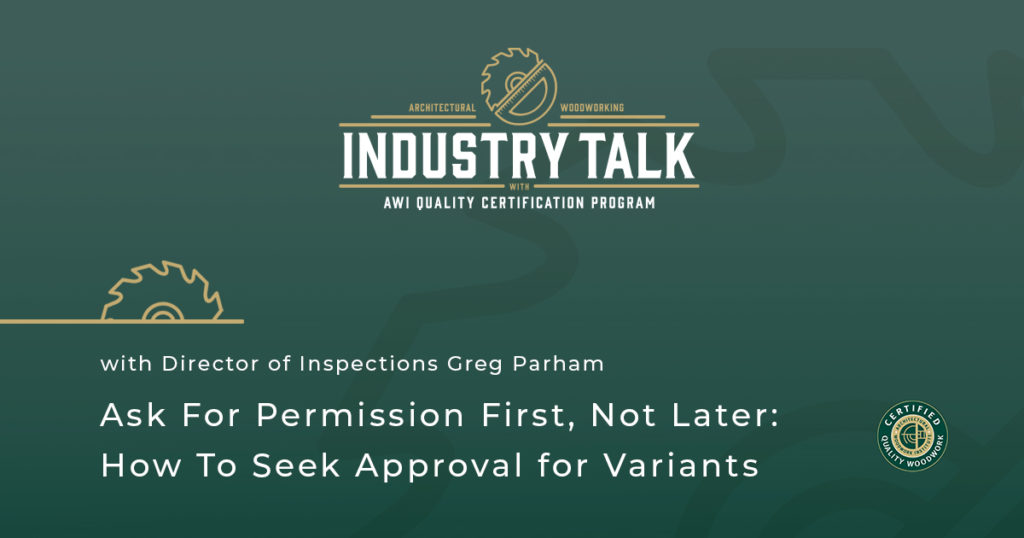 Ask For Permission First, Not Later: How To Seek Approval for Variants

Our latest podcast is hosted by QCP Director of Inspections, Greg Parham, as he talks about the importance of asking for permission first, not later, when seeking approval for variances to a project specification or the AWI Standards.

Continue reading to find out what Greg has to say on why you should ask for permission to modify at the beginning of a project, the consequences if you don’t do this, and how you should approach asking the big question. You can also listen to the entire podcast here.

Can Woodworkers Ask For Permission To Modify?

“So what do we mean by permission?” Greg begins. “In simple terms, we are discussing an approval for variants, which in the QCP policies is called permission to modify.” Referred to as PTM in the AWI-QCP Policies, permission to modify gives woodworkers the opportunity to deviate from a requirement in the project specification and/or applicable standard without it affecting the QCP project certification, as long as they gained permission before the project was completed.

It’s a common misconception held by many woodworkers and architects that a QCP-certified project must follow the project specifications and the standards exactly, with no opportunity to deviate from the requirements. Luckily, this isn’t the case.

Greg says, “The reality is that you can build and install cabinets or any other product any way you want, provided that, if your method varies from the contract documents and/or the standards, you have asked and received permission from the architect or owner, and you have written approval for the variance.”

This brings us to who can approve permissions to modify. When there is a nonconformity in a QCP inspection report, woodworkers often state that the general contractor approved the variance. This is another common misconception because for QCP certification, we need to see that either the architect, owner or the documented designated owner’s representative is aware of the variant and has approved it, not the general contractor.

Why Ask For Permission First?

One of the reasons we hear from woodworkers on why there is a nonconformity in the project is that the architect or client didn’t know what they wanted, or that the specification is just an old boilerplate spec and isn’t really what the architect or client wanted or would benefit from. However, while this may be the case, our Director of Inspections explains why this can be an issue.

Greg goes on to say, “QCP has no way of knowing if [what the woodworker is saying] is true or not. So, while your intentions are to give the architect or owner what you believe they really want or should want, QCP only sees the documentation that they agree with you.”

If an area of the project doesn’t comply with the documentation, and we can see that no permission to modify has been made, then the project won’t be granted QCP certification despite the woodworker’s best intentions. This is why you should seek approval for variants before we inspect the project.

Greg explains that asking for permission first rather than later may also help woodworkers on future projects. This is because it could prompt the architect to revise that old boilerplate spec, or make them more receptive to advice or changes if you work with them again.

What The Architect Wants vs. What The Woodworker Suggests

Sometimes, of course, there can be discord or miscommunication between what an architect or project guideline has specified and how a woodworker would approach a project. This is often the case when it comes to woodworkers substituting specified materials or assembly methods in a project for what they believe to be superior alternatives.

Greg Parham: “We see this occur in laminate casework. The standards require a drawer box to be clad in laminate, either high pressure laminate or low pressure laminate, and the majority of project specifications for laminate casework also call for the same. However, sometimes a woodworker will provide a solid wood dovetail drawer and will tell the QCP inspector: “well, the dovetail drawer is a spare drawer”. While this may be true, QCP is not in a position to make that determination.”

Indeed, QCP are unable to make exceptions based solely on the testimony of woodworkers. Greg continues by explaining that “we look at what is specified or required by the standards, so while the woodworker may have good intentions, there may be a reason the architect wants melamine or laminate drawer boxes.”

It’s important to remember that specifications aren’t only there to ensure a project complies with the standards or meets best industry practices; specifications may also reflect what the architect wants or needs. Continuing the laminate casework example, there are many reasons why an architect would need laminate drawer boxes. For instance, if they’re for medical offices, this material facilitates ease of cleaning and sanitization. “In fact,” Greg says in the podcast, “We ran across locations in the country where the health regulations actually require laminate door boxes for medical facilities.”

If a woodworker in this position swapped out the drawer material, it would result in a costly and lengthy process of going back to replace hundreds of drawers later on. So, if you feel strongly about offering a different material, whether it’s dovetail drawers or something else, it’s always safest to ask permission first.

What Happens If You Don’t Get Variant Approval First?

We at the Quality Certification Program want to see that everyone knows what is being provided, and that they all agree with what is being carried out. If there is evidence of a nonconformity in a project that has not been agreed to by all parties, it directly impacts your ability to gain QCP project certification. In the podcast, Greg briefly explains how the process works.

“With a QCP inspection project, we look at the documentation provided and the standards referenced, and compare that to the product received in an inspection, and determine if the two agree. If not, then we list those items as nonconforming and those items must be either addressed or corrected, or you can ask the architect or owner to accept them without correction.”

Aside from the extra cost, labor, and time incurred by an unapproved variant, not asking for permission to modify at the start of a project can impact on your ability to get the project certified, which in turn can impact negatively on your reputation among clients: “The problem with waiting until we have found a non-conforming item during inspection and then asking for approval, is that the project will receive a limited certification and your firm will be placed on probation, resulting in additional costs on future QCP projects until the probation is lifted.”

As well as this, you will also likely incur additional costs by making corrections to nonconformities, or even by negotiating with the architect or owner to get them to accept the nonconforming items without correction. But all of these additional costs can be avoided by asking for permission first.

Are Stamp-Approved Shop Drawings Evidence Of Prior Permission To Modify?

You may be wondering how best to address asking for permission first and what the most efficient way of doing this is. We recommend itemizing the variances in a variance request listing when you submit your shop drawings. But before we get into that, it’s important that we first address another misunderstanding regarding stamped-approved shop drawings.

There are many times when a woodworker will point to stamp approved shop drawings as evidence of prior permission for a variant. However, this doesn’t count as permission to modify.

Greg explains: “For shop drawings to constitute prior permission, any variant shown in the shop drawings must be clearly identified as a variance to the specifications or standards […] There must be some method, usually a box near the various identifiers, in which the architect can initial or sign, indicating that they are aware of the variance and are approving it. If a shop drawing does not have this clear identifier as a variance approval, then they will not be considered approvals.”

How To Ask For Permission To Modify

In a nutshell, if the architect hasn’t explicitly acknowledged a variant in a shop drawing, then even if that shop drawing has been stamp approved, the variant will be listed as a nonconformity. But there is an easy and efficient way to ask for permission to modify at the start of a project.

Greg says, “QCP’s recommendation is to include a variance request listing when you’re submitting shop drawings. By listing the variances you seek approval for in the beginning, it makes for an easier project, and we have found that the architect appreciates it also as they have to deal with it one time, instead of getting hit with multiple RFIs.”

Compiling variances into one listing is also much easier than trying to fit them in areas for approval throughout a set of drawings: one document, even if multiple pages, is much easier than sifting through several documents.

How To Create A Variance Request Listing

When creating a listing, we recommend providing a box beside each line so that the architect can easily check or initial to indicate approval. That way, if they are willing to accept some, all or none of the variances, it will be clear to the QCP inspector, and everyone else involved when they see the pages. This method also gets the decision of variances addressed upfront, giving the woodworker time to know what they can do and what they’ll have to alter before the QCP inspection.

As Greg explains, “If we have the documentation and the variance was approved before the inspection, then those items will be considered conforming and the project will be fully certified, a win for both the woodworker, architect, owner, and yes, QCP, as a fully conforming project requires much less time and work for our staff.”At the end of it all, asking for approval for variants before a project starts can save everyone a huge amount of time, expenses, and stress – so always remember to ask for permission first, not later!