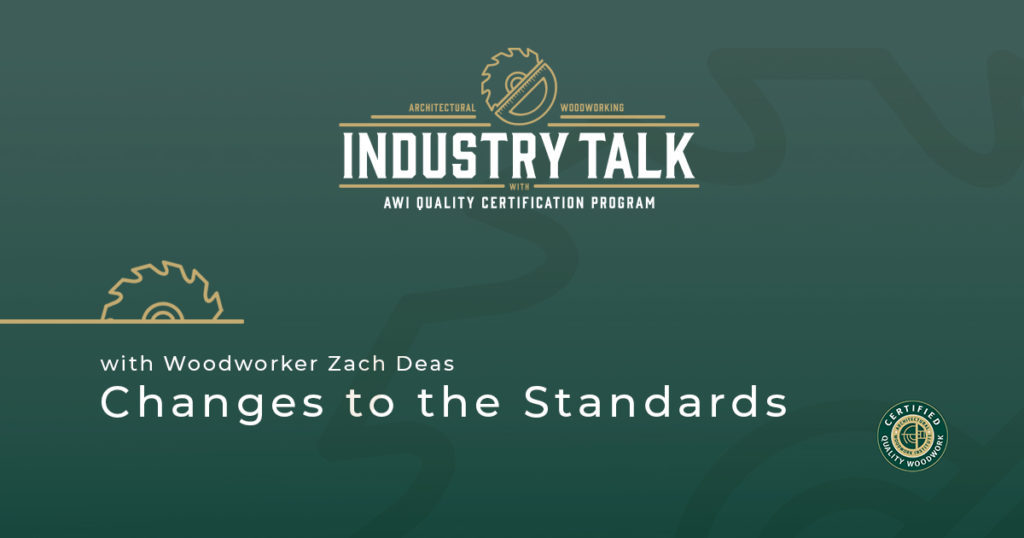 A Chat with Zach Deas, Millwork Owner and Chair of AWI-QCP

We recently spoke to Zach Deas, owner of Deas Millwork in Semmes, AL, and current chair of AWI-QCP’s board of directors, about the AWI Standards of Architectural Woodwork and the updates AWI is currently making to some of the standards.

The latest version of the AWS is Edition 2 (2014), and AWI has since created publications that address their individual standards as an association. AWI specifically has created AWI 100 (submittals), AWI 200 (care and storage), AWI 300 (materials), ANSI/AWI 0620 (finish carpentry and installation), and ANSI/AWI 0641 (architectural casework).

There is now more of a focus in the standards on the structural integrity of architectural woodwork and related interior finishes rather than being a prescriptive list of requirements to follow. This allows woodworkers increased flexibility in following specific criteria for performance and quality when purchasing, manufacturing, or installing architectural woodwork.

We talked to Zach Deas, woodworking firm owner and chair of AWI-QCP, about how these new standards, completed with the support of the American National Standards Institute (ANSI) could impact woodworkers. Here’s what he had to say…

How Might the new AWI Standards Affect Woodworkers and Architects?

Zach Deas: “In the short run there’s not going to be a whole lot of difference, but as these new standards embed into the marketplace and become more widespread and start getting put into architects’ specifications, we are going to see some changes. Obviously the new ANSI standards vs the AWS are slightly different, and as woodworkers we’re going to have to be up to speed on this so that we can continue doing compliant work, especially on QCP-certified projects.

“One of the things that has come up in the new ANSI standard are the new duty level specifics on casework. There’s now the need to either have some testing methodologies that you’re building to, or have your product tested. As woodworkers, we’ll see quite an effect on what we’re doing with those requirements.”

The duty level designations that Zach refers to are one of the most significant aspects of the new updates. There are four different designations and they’re separate from what most people were used to in the AWS which were the grades of work (economy, custom, premium). Those grades of work are still in place, but only for aesthetics. The duty levels will address the construction methodologies of casework and performance duties of the different casework levels.

This is a significant difference, as it means that companies can now use their own proprietary methodologies rather than following a prescriptive method as was the case previously, and they can have their casework tested at any ANSI-accredited testing lab. They could also use or adopt the methodologies that AWI has confirmed through testing. AWI set up a testing lab two or three years ago, which has been testing methodology for casework construction, and they will make available to AWI member firms, these methodologies. Firms that choose to use these methodologies (a lot of which are the same as the ones from the AWS section 10, e.g. biscuit joinery construction, dowel construction, Euro screw construction) will still have them available. The only difference now is that they have been designated with a duty level.

As Zach says, “QCP will be helping educate AWI members, woodworkers and all stakeholders about how all these things dovetail together and the reality of how you meet these requirements from a process standpoint.

“I think part of the challenge is from the architect or specifier end, as there’s going to be a learning curve to fully grasp the concept that the testing and the duty level is based on a stripped-down box with no finish, no doors, no veneer, no laminate, no decorative coating. It is strictly based on the joinery methods and how they perform as an assembly. A very important part of a build, obviously, is that your casework doesn’t come apart or fall off the wall under normal use, but that duty level designation and testing has nothing to do with how the product is installed or how it looks, or all the other facets of what we do like countertops, running trim, doors, windows, and wall paneling. That’s a good thing though, as it provides clarification on what someone is looking for based on its ultimate intended use.”

If you Have These Testing Methodologies, why do you still need QCP?

Zach acknowledges that this might be a question QCP is asked, and says, “you still need QCP because that testing and those methodologies are only a small slice of what a specifier would be specifying, so you still need QCP to help make sure woodworkers are performing as required and following the industry standard as far as the quality and methodology of work goes.” It’s true to say that you won’t be eligible for QCP certification if you don’t meet all project requirements.

The Wider Picture of Changes to the Standards

Zach is looking to the future for another positive in this new method of testing. He says, “one thing I’m excited about with this advent of testing in our industry is that it’s going to give us a lot more of the reasons why. Why do we do something in one way instead of another? Why do we use this fastener vs. that fastener? It will take some time for a body of knowledge to be built up based on the testing that AWI and members are doing, but I look forward to the sharing of that information and what it can do for our industry.

“Right now, a lot of the things that we do from a process standpoint, we do because that’s how we’ve always done it…but we really don’t know why. So I think it’s going to be very informative to see some of this testing information coming out, and see how it can maybe shed some light on the reasons we do some things we do, and it might change our minds about some things and guide us into doing some things a different way. Obviously it’s going to take some time for there to be a large enough body of work for us to have some meaningful information more than anecdotal evidence, but it’ll be pretty interesting, and it will be good for the industry.”

We definitely agree! Putting science behind our industry is a great step forward. The history of our standards and how they were created was developed by a few people sitting round a table and making a decision. It’s been based on best practises and it’s worked well for about 50 years, but now that we have testing and science, we’re entering a new realm. Now we have confirmation on why this is better than that, why one methodology is superior, and we can prove why that’s what we should be using. It will no longer be subjective.

Find out more about registering a project and applying for a QCP license.